Have You Seen Gropple (or Graupel) Before? The Fun Times Guide has yet another “roving reporter” that I’d like to introduce you to.

Meet Ron. He’s currently in Montana, on the banks of the Clark Fork River between Butte and Missoula, working as a fly fishing guide.

Yesterday, Ron was groppled upon.

I have to admit, I didn’t know what gropple was before this.

Turns out, graupel is a light & fluffy form of precipitation similar to hail — as seen in these photos:

In Ron’s own words:

It groppled on us yesterday, but not for long.

It started coming down and I said something like, “It’s snowing… or sleeting… or snowsleet.” And Joel said “It’s gropple.”

I’d never heard of gropple but it’s like tiny fluffy hail stones. I had to look it up. One description I found said it was like snow without any arms or legs. That pretty much nails it.

The gropple turned to rain and left us muddy and mucky. It left the mountains white.” 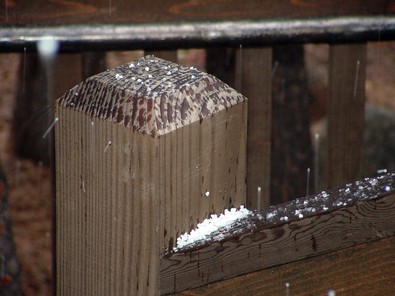 Thanks, Ron! I had no idea what “gropple” was either. I guess winter is just around the corner.

UPDATE: Ron is now a regular contributor on The Fun Times Guide to Fly Fishing site.

Graupel forms when snow in the atmosphere encounters supercooled water. In a process known as accretion, ice crystals form instantly on the outside of the snow and accumulate until the original snowflake is no longer visible or distinguishable. Source

Closeup Photo Of Gropple On A Ski Lift

Another Description Of Gropple: Lightweight, Hail

How To Make A Temporary Roof If Yours Gets Damaged By A Hurricane, Tornado, Or Severe Weather Storm

Why Does The Wind Blow?