38 Shares
This post may contain affiliate links. If you purchase through these links, we may earn a small commission at no additional cost to yourself.

Ice is one of the most troubling and dangerous aspects of cold weather — especially when icy conditions impact the roads you’re driving on! Snow, icy weather, and other forms of cold precipitation cause many traffic accidents.

Some 1.2 million road accidents are caused by hazardous weather each year, killing more than 6,000 people and injuring 445,000 others.

Ice is also common in the late fall and early spring throughout much of the country, and it can form any time of the year in some regions under the right conditions.

Hail — another dangerous form of ice — often occurs in the summer and presents its own level of danger.

Of course, many towns and cities use salt, brine (or sometimes sand) to help eliminate some of the dangers of driving on icy roads.

But it’s impossible to apply salt, sand, or brine to all roads at a single time in an entire community. So, the earliest hours of a winter storm or icy conditions are often the worst. Let’s look at 5 of the most popular types of road ice, why each one is so dangerous, and how to drive safely in each icy situation…

If you haven’t experienced snowy roads before, you’ve probably seen photos that look just as treacherous as the real thing — inches, even feet, of snow covering roadways, blocking driveways, and creating a wintry mess. There are 3 ways that snow can lead to icy situations when you’re driving: How To Drive On Snow:

When your car starts to slip and you’re heading for a crash, every second counts. Driving too fast reduces the amount of time you have to react and increases the severity of any collision. It also takes 4 to 10 times longer to brake on icy or snowy pavement than it does on dry asphalt. Source

Must read: How To Drive On Snow In A Regular Car Without Freaking Out

Sleet and freezing rain are other serious winter road hazards. Here are some stats. Here are the differences between sleet and freezing rain (because telling them apart can be a bit confusing):

Freezing rain and sleet are particularly dangerous on bridges, overpasses, and other stretches of roadways where cold air can surround the roadbed, causing those portions of the road to freeze more rapidly.

How To Drive In Freezing Rain:

Must read: How To Drive In Sleet And Freezing Rain

Road ice can be very difficult to see — especially when it forms as black ice, one of the scariest winter road hazards.

The ice itself isn’t actually black. Rather, it’s a thin coating of transparent ice that allows the black (or darker) roadway surface to show through the icy layer. Black ice is sometimes impossible to spot, though there are a couple ways you may see it:

You’re better safe than sorry when it comes to driving on roads that may have black ice.

How To Drive On Black Ice:

Must read: How & Where To Spot Black Ice On Roadways

Hail is a type of frozen precipitation that can form during anytime of the year, including during the late spring and summer — when severe weather forms throughout many parts of the nation on a virtually daily basis.

Hail forms during thunderstorms as hard pellets of ice formed as raindrops are pushed high into the clouds by updrafts. The hail often takes many trips up and down inside thunderheads before dropping to the earth as hail

Hail can range in diameter from the size of a pea to larger than a baseball. Regardless of its size, hail can be incredibly dangerous. One of the worst things is to get caught driving through a hail storm. Not only is hail a dangerous road hazard because it covers the road with icy pellets (hail often melts within seconds of reaching the ground in warmer weather), but also because large hail pellets can actually smash car windshields, causing severe injuries and even death.

In fact, according to the National Oceanic and Atmospheric Administration, 24 people die from hail each year. How To Drive In A Hail Storm:

Must read: How To Angle Your Vehicle To Protect The Car Windows

It’s bad enough having to worry about snow, sleet, freezing rain, black ice, hail, and other forms of road ice that can cause accidents and dangerous driving conditions.

But, what about manmade ice?

Sprinklers are one of the most common forms of manmade road ice. Misguided sprinkler heads can cover roadways with water that can form into thin patches of ice. Other causes of manmade ice include splashing water from waterfalls, water fountains, running hoses, leaky fire hydrants, and the like.

How To Drive On Manmade Ice:

You should treat driving on manmade road ice just like driving on black ice (see tips above).

Must read: What To Do If Your Car Skids On Ice – How To Correct A Slide

Summary: How To Stay Safe When Driving On Ice

The best way to stay safe when the roads are covered in ice is to simply stay home. But if you must be out on the road during bad winter weather, remember these safety tips for driving on ice:

If You Get Stranded While Driving… More Tips For Driving On Ice 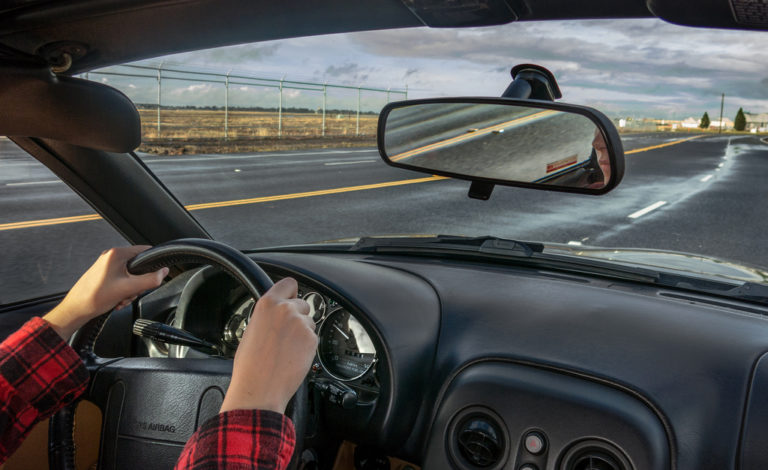 El Nino Weather Facts: How El Nino Affects Us & Why We Should Care