13 Shares
This post may contain affiliate links. If you purchase through these links, we may earn a small commission at no additional cost to yourself. Thunder snow is an alarming phenomena that occurs when lightning (which causes thunder) strikes during a snowstorm.

Many people don’t usually associate lightning with snowstorms — which is not surprising. After all, thundersnow is relatively rare.

There generally 3 types of thundersnow events: Ordinary thunderstorms result from warm, moist air rising into the atmosphere to heights of perhaps 40,000 feet or more — with ground temperatures often much warmer than the freezing threshold of 32 degrees Fahrenheit. On the other hand, thundersnow storms occur in flatter, shallower clouds, and the precipitation (snow, generally speaking), forms under 20,000 feet.

An exception to this would be lake-effect snowstorms (such as clippers) which form due to moist, warm air rising from the surfaces of lakes. These storms, therefore, look and behave more like traditional thunderstorms.

Thundersnow events most often occur when bubbles (or turrets) form vertically in the otherwise flattish snow cloud. This can be caused by lifting influences at the 20,000-foot altitude level, such as a mid- or upper-level trough. Since air cools as it rises, the rising cloud top also cools, as compared to the rest of the cloud.

If the layer of air directly above the main snow cloud is cool and dry and the lifting and cooling in the rising area of the cloud is strong, this can cause instability over the top of the surrounding cloud. If the unstable area of the cloud occurs when the temperature at the level is between 14 degree Fahrenheit to -4 degrees Fahrenheit, then snow or even small hail pellets called graupel may form.

The deeper layers of the cloud is where snow can form, and moisture within the updrafts in the cloud can lead to the formation of heavy snow. Sometimes, the interaction of these snow and graupel particles through updrafts and also downdrafts within the cloud can create electrical charges, which gives rise to lightning.

In, say, a summertime thunderstorm, much of the air rising to the top of the cloud comes from the ground. Whereas in a thundersnow cloud, the updrafts occur around 20,000 feet — as you’ll recall from above — due to troughs and other mid to upper-level influences.

Fun Fact: Snow can suppress the movement of sound waves, therefore the sound of thunder may be heard perhaps only 1 or 2 miles from the source of lightning, while the same sound waves can travel for many miles in a conventional thunderstorm.

Where You’re Most Likely To See Thunder Snow

Thundersnow is rather rare across the board. However, there are times of the year and parts of the United States when and where this unusual phenomena is more prevalent.

Thundersnow is most often seen in regions of the country where lake-effect snow is common, such as the Upper Midwest and parts of Pennsylvania and Upstate New York.

Areas around the Great Salt Lake and Bozeman, Montana may also experience thundersnow. 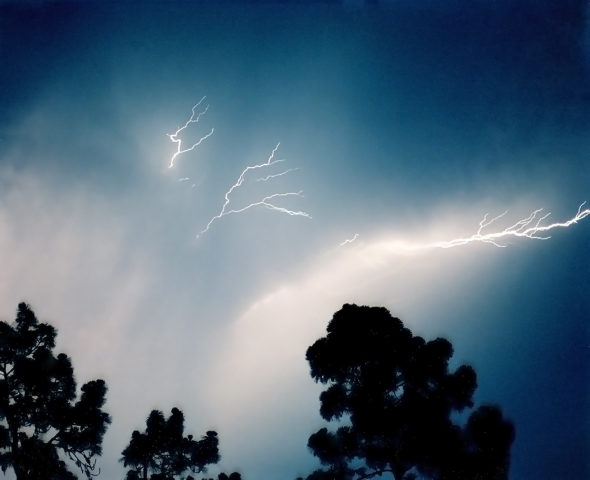